Small Parcel Boxes are a range of great quality postal boxes we produce in a range of sizes that conform to Royal Mail Small Parcel size restrictions. This allows users of these small parcel sized postal boxes to send out items at a reduced rate of postage and can help save considerable sums of money on postage costs.

We make our Small Parcel Postal Boxes in a range of useful sizes which allow our customers to select a small parcel box to suit the size of their items. This has the benefit of reducing the need to pack items in overly large small parcel cardboard boxes & helps reduce the need for fillers such as bubble wrap or other void fill. Good for the environment and saving you even more money on packing.

Our stock range of Small Parcel Boxes are die cut & offer strong levels of protection, we can of course produce custom boxes for clients that require bespoke postal boxes that conform to Small Parcel sizes.

If you have smaller items that fit into our Large Letter Boxes you may be able to make even greater savings on postage charges when sending out your goods. 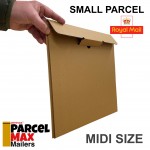 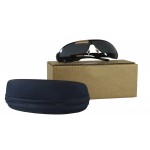 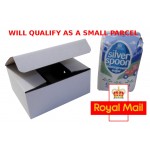 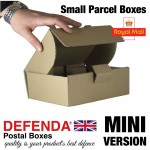 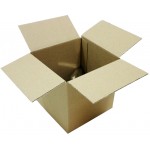 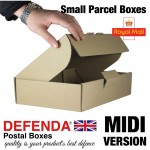 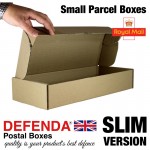 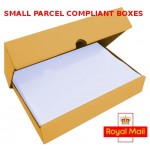 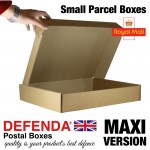 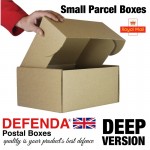 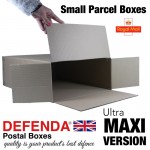 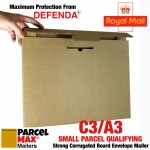 After introducing Pricing in Proportion for Letters in 2006 when they divided letters into Standard Letters & Large Letters, Royal Mail delayed the introduction of sized based pricing for packets or parcels until 2013 when they divided parcel categories into: Small Parcels, Medium Parcels & Large Parcels.

Postal Tubes can measure up to 450mm or 45cm to be treated as Small Parcels under Royal Mail Pricing In Proportion or PiP Rules.

Postal tubes or cylindrical items can also be sent with Royal Mail as Medium Parcels. with tubes the rules are slightly different: the length plus twice the diameter must not exceed 1040mm (104cm) & as long as they don't exceed 900mm (90cm) in length, they can still be sent as Medium Parcels. To work out if your tube qualifies as a Medium Parcel: simply measure the diameter & double it. Then add the length to ensure it does not exceed the maximum volumetric of 1040mm

Medium Parcels have a weight limit of 20kg.

If you have parcels that are heavier or larger than the maximum Medium Parcel size and weight limits, your parcels would need to be shipped as large parcels with Parcelforce (maximum weight of 30kg and maximum size of 2.5m and 5m length & girth combined). 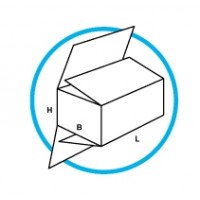